Independence Day: A Story You May Not Know

The orange glow from the burning White House and Capitol could be seen for miles on the night of August 23, 1814. The British looted and ransacked the Capitol and White House and then torched them. They also burned the Library of Congress and the U.S. Department of War. The next morning, the buildings up and down the national mall lay in ruins and billowed with black smoke.

This struck deep into the psychological heart of our fledgling nation. It must have seemed like the United States was not going to last very long.

Maybe you knew the White House burned down to just an outer shell, along with many other important buildings, but I didn’t. Somehow, this was not emphasized in my history book—maybe I just wasn’t listening.

But this story is important for us to know because something remarkable, almost supernatural, happened the next day.

As our nation’s capitol continued to burn, a sudden, very unexpected hurricane hit Washington. The driving rain put out all of the fires. Several tornadoes spun off the hurricane, stopping the advance of British troops, hurling cannons in the air and killing 30 British soldiers. American forces suffered too, but most had evacuated, and were spared from the worst of the storm.

The demoralized British army, one of the most powerful armies in the world at the time, had to retreat. The occupation of Washington lasted only 26 hours.

A powerful ally didn’t come to our aid to push the British out. A courageous general didn’t storm in and retake our capitol. Heroic firefighters didn’t even put out the blazing buildings.

Washington, D.C. was taken back by a force of nature…by God, Himself. The recovery of Washington sounds kind of similar to one of the miraculous battles we read about in the Old Testament.

Consider what an unlikely “coincidence” it was:
• A hurricane and three related tornadoes hit at just the right time, on just the right day, with enough water to put out the burning buildings and enough wind to batter the British soldiers into retreat.
• Only seven tornadoes have been reported in D.C. since 1814, each doing minimal damage.
• The strategic storms changed the course of the war, the course of our history and the course of world history.

The War of 1812 has been called the “forgotten war.” The occupation and destruction of our capitol is one of the most de-emphasized stories in American History. Many Americans don’t know about it. Even if we do, I suppose very few pause to consider what God did for us.

Maybe this is because it was a very sad chapter in our nation’s history. But I wonder if it is also because this story includes the intervention of “providence” or God. Those modern day miracle, faith building, pointing-to-God-perspective stories are not often taught to our children. Sometimes, we even skip exploring and teaching the Godly perspective of history at church. These kind of stories can make us uncomfortable because God’s plan is hard to grasp.

Yet, no matter if we acknowledge it or not, God is working among the nations today, just as He always has and always will. This is important to know because lately, it seems like our world is spinning out of control.

It’s hard to make sense of it all. The good thing is, we don’t have to. The Bible tells us:

“He [God] controls the course of world events; he removes kings and sets up other kings,” (Daniel 2:21).

God is working His mighty plan in order to save souls. It’s important to pray for insight into how He is working today and how we can join Him. Each one of us has a part to play in God’s great plan, if we are willing to play it. Since we can’t grasp God’s plan entirely, the most important thing we can do is to stay close to Him and be willing to do whatever He calls us to do.

In Psalms 73, Asaph had similar feelings a long time ago. He wrote:

Trying to solve this mystery on my own exhausted me;
I couldn’t bear to look at it any further… (v. 16)

But the closer I am to You, my God, the better
because life with You is good. (v.28 VOICE)

This holiday weekend, celebrate the fact that God saved our country from the British and from many other enemies for a purpose. He has a purpose for everything He does. God has come to our aid many times, so let us be thankful. And He doesn’t only come to our aid, God comes to the rescue of anyone who turns to Him, to any people or nation He uses for His glory. (Ps. 37:38-40).

Independence Day is a national blessing that I hope we never lose. But even as we celebrate our independence from other nations, may we grow increasingly dependent upon our God who is sovereign over all. 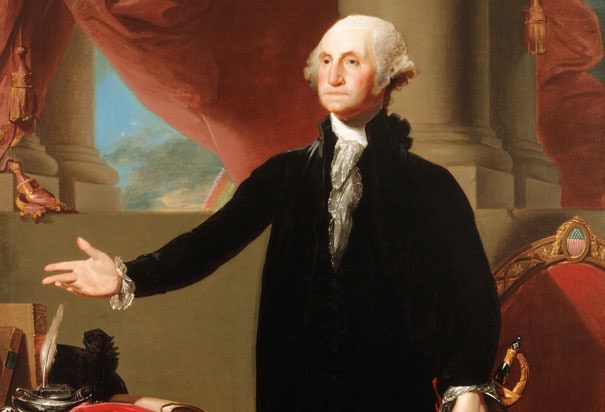 *Interesting fact: Dolley Madison rescued this portrait of George Washington the night the White House burned. It was cut from its frame, rolled up and taken with her as she fled.