Feeling Stuck? Experience an Outback Weekend With Your Teen for FREE!

“Stop it or I’ll bust you. Shut up or I’ll shut you up with my fist, boy!” said my electrician to his son, as they installed my new oven.

I happened to be walking down the hall just as their anger erupted. I didn’t know what to do, so I ducked quickly behind the den couch and listened.

In retrospect, this probably wasn’t the smartest thing to do.

The son responded, “It’s your fault I’m in a bad mood—everything you do drives me crazy! Plus, I didn’t get much sleep last night and you’re making me work too *darn* much.”

The dad insulted and threatened.
The son made insolent, childish excuses and accusations.
I crouched awkwardly behind the couch, wishing I could disappear.

The son wasn’t a boy—he was a married, 28-year-old man—yet he responded like he was 12. The father was condescending and rude. He thought threatening his grown son with physical punishment was okay—even in my kitchen.

Finally, the electricians went outside to get something, and I crept out from behind the couch. When they came back in and saw me in the kitchen, they were pleasant, as if nothing had happened at all. I realized that this was a normal day for them. And unless something or someone changes, their relationship will remain stuck.

As a Mama, I’ve been stuck a few times with my children, too. Experiencing a JH Outback Weekend with my teenage son really helped our relationship. (Outback is a retreat for parents and teens, husbands and wives) It gave us a chance to reconnect. I learned how I must transition my parenting as my son transitions into adulthood. They called this the “Journey of Transition.” And I discovered it was a journey I sorely needed to make. 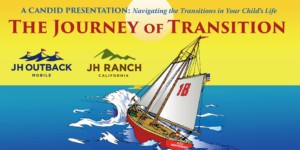 That weekend helped me stop being such a “helicopter Mom” and equipped me to start trusting God more with my children.

And I am so grateful that we went.

Maybe it would bless you, too. Watch this video for more information:

The Huntsville JH Outback is coming up soon, April 27-29, 2018. It offers a once in a lifetime experience in the beautiful Paint Rock Valley, near Huntsville.

There’s not another weekend quite like it–and I want you to come!

If you’re not a subscriber to my site, simply sign up below or in the pop-up box and I’ll send you further information, plus you’ll also receive updates when I post a new blog and have other special giveaways.

Of course, this offer is also for current subscribers because I love and appreciate you! Email me at hello@maypatterson.com for further information.

Don’t miss the opportunity to get away with your teenager or spouse for a transformational, uniquely Christian experience. Outback has been called the “everlasting adventure.” Take the chance that it might just be that for you.