I don’t know you personally and probably never will.

But I’d like to thank you anyway for the valuable example you’ve been for me and for everyone else who’s been watching you and Alabama football over the last year.

A lot of people on your team are very gifted. But you are one of those rare, gifted people who are willing to make wise choices even when you’re disappointed.

Thank you for choosing to:
Use positive and kind words, instead of lighting up social media with bitter ones.
Encourage your friend Tua and the team, instead of only thinking about yourself.
Work hard to be the best player and teammate you could be, instead of quitting.

As my family watched the SEC Championship Game, we yelled, cheered and fist-bumped through the entire 4th quarter. We couldn’t sit down. We were in awe, knowing we were witnessing something special.

And as much as we wanted Alabama to win, we wanted you to win even more.

Here’s why: many of us believe your story was scripted for a greater purpose than football. You gave us a living, breathing example of how faith in God, perseverance and hard work are rewarded. The gracious way you faced a tough situation inspires us to do the same.

Thank you and may God bless you for showing us how to act when life doesn’t go our way,

As I watched Jalen Hurts play in the 4th quarter of 2018 SEC Championship Game, I was inspired. And a bit convicted. I’m not a sports writer, or one of those over-the-top, rabid Alabama fans (since I also pull for Auburn), but Jalen Hurts’ success story is not solely about sports.

All of us will have to face tough days. But how we face them makes all the difference.

Here’s what Jalen’s story teaches me:

The value of putting your team’s agenda before your own.

Jalen Hurts was the starting quarterback for Alabama for two years. Last January, he was benched in the National Championship Game while his friend Tua took over his position. Yet in the midst of personal disappointment, Jalen still chose to celebrate saying:

“We won. We’re national champs. You can’t wish for anything better than that.”

Jalen has been benched for almost all of this season, too. But when he was needed, he came off the bench and led his team to be SEC champions with a stellar performance. Afterward, an emotional Nick Saban said:

“Jalen put his team first. He’s done all we asked. . . He will benefit more from this than if he played.”

Saban is right, for Jalen’s story will not merely live on in football history, but also in our hearts.

As a Christian, it challenges me to put God’s agenda before my own desires. It reminds me that the game of life is not really about me at all, and it never will be.

Life centers around God, and His great work in this world. I’m just a player on His team for a short season.

Jalen’s example inspires me to play my God-given role (no matter what that may be) to the best of my ability. To play for a purpose that is greater than myself.

“I’ve been fighting for a year, not knowing what the result would be. Competing, keeping faith and God was with me . . . I prepared as if I’m a starter (not merely a backup), so when the call came, I was ready.”  Jalen Hurts

To improve, Jalen probably had to work harder than most of us realize. He had to listen to the advice of his coaches. He had to be willing to change. Taking things personally, pouting and complaining, would have blocked his progress. Jalen had to humble himself in order to grow.

From this I learn that improving yourself requires humility. That rare kind of humility that freely admits, I’m not perfect. I can learn to do it better. I want to be the best I can be. Jalen didn’t just wake up that morning with the ability to play at the top of his game. He worked at it every single day.

This inspires me to develop my gifts with the same kind of humble attitude. I’m not perfect, either. I can always improve. I want to become the best that I can be, instead of complaining about someone else’s lucky break or making comparisons.

Humility is a costly virtue, but it frees us to play our game well.

The value of being a friend, rather than being a foe.

After being the starting quarterback for two years, Jalen’s friend Tua took over his position. I imagine that was one of the hardest nights of his life, yet Jalen smiled and praised Tua, saying:

Jalen chose to be genuinely happy for someone who got something he really wanted.

He and Tua chose to remain friends instead of letting jealousy drive them apart: 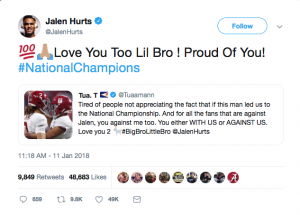 Sometimes, crying with friends is easier than rejoicing with them over their good fortune. I’m inspired by Jalen’s example to be genuinely happy for my friends, even if they get what I truly want most.

The value of leaving your destiny “in God’s hands,” instead of taking it into your own.

When Jalen said “I put it in God’s hands” after the recent SEC Championship game, I was humbled. It brought to mind several times I’ve tried to control my destiny—to force a certain outcome. But God calls us  to trust Him in all circumstances, in both victory and defeat.

Jalen trusted in God through an entire year of disappointment and humiliation on a very public stage. He had no guarantee of success. Back in September, while he was still on the bench, he gave us a picture of what walking by faith is: 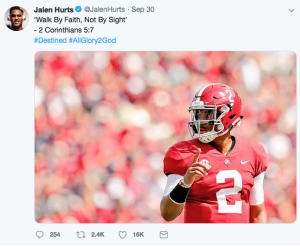 Great things happen when we trust God in all circumstances. And if we walk by faith, God sees it. He rewards those who trust Him. Some of us, like Jalen, will be rewarded in this life. And some of us may not be rewarded until the next. But no matter what, we can trust in God’s promise:

“Those who stand firm during testing are blessed. They are tried and true. They will receive the life God has promised to those who love him as their reward.” (James 1:12, CEB)

This year, Jalen Hurts was selected as the team’s “Most Inspiring Player” by his teammates. Surely, no one deserves it more: 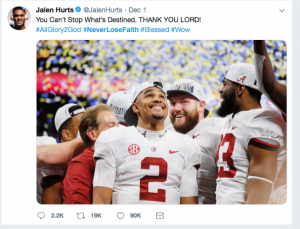 If you are disappointed with how your life is going right now, I hope you will be inspired by the story of Jalen Hurts, too.

No matter what team you pull for, remember the extraordinary value of:

Placing God’s agenda before your own desires.
Working hard, even though nobody seems to notice it.
Humbling yourself so that you can learn, grow and improve.
Facing bitter disappointments and humiliation with faith in God’s plan.
Walking confidently onto the field of life to play the role you were born to play.

Through every attack, tackle and get-up-and-try-it-again of your life, remember Jalen. Persevere in faith, leaving your destiny “in God’s hands.” 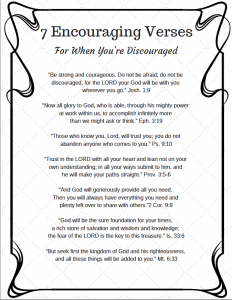 To request this free list of encouraging verses, email me at hello@maypatterson.com