Death at a Christmas Party

Just as the guests arrived, my friend Beth noticed Maxine, her sweet little pug, lying mighty still—kind of like a corpse—on her red plaid pillow by the fireplace.

Now Maxine was old, and while her death was a mercy and expected, Beth never dreamed that Maxine would pass on during the Christmas party.

Before Beth could react, a group of laughing ladies sat down to eat right next to Maxine, not even noticing her lifeless body.

Beth didn’t know what to do.
Should she remove the dead body and spoil everyone’s appetite?
Or . . . should she just sit tight and hope no one would notice?

Just then, a lady wearing red suede pumps tripped on the rug and almost fell on top of the dead body, catching herself just in time on a nearby chair.

Someone said, “What a good dog, she doesn’t mind having company,” (no, I guess not).

When another group hovered near the body, Beth broke out in a sweat. If someone reached down to pat the dog, it might feel, umm . . . a bit cold.

Beth held her breath as she watched women stomp all around the dead body in their colorful stilettos and trendy boots.

To her astonishment, no one noticed.

When an impromptu meeting was called to order, the ladies sat down—in the den.

“Your dog must think we’re boring,” someone quipped. Beth smiled awkwardly. She hoped for an opportune time to remove Maxine, but it never came.

At first Beth was really sad, but after several hours the awkward situation turned into a sort of morbid humor—the kind of uncomfortable, side-splitting humor that sometimes emerges at funerals, when it’s totally inappropriate to laugh, but you just can’t keep it in.

The longer the hostesses tried to stifle their laughter, the funnier and funnier the unusual situation became.

And although this happened several years ago, Beth’s friends can’t talk about that party without breaking into hysterical laughter. It was the most awkward party predicament, ever.

It’s an amazing story when you think about it, a large room filled with people who were totally oblivious to the dead body right in front of them.

It makes me wonder, how often do I fail to notice what’s right in front of me?

Am I blind to the tears glistening in someone’s eyes?
Do I listen close enough to hear the pain in another’s voice?
Do I notice subtle clues, like a sigh or a despondent expression?

Like a mule with blinders, I can get so focused on the road ahead, that I don’t really notice others around me. Maybe you can relate.

Beth’s story teaches me that you don’t usually see what you’re not looking for.

That’s why it’s important to ask the Lord to help you see. To train your eyes to notice people, instead of looking past them. To broaden your perspective.

I want to become a better noticer**, and I hope you do, too.

Here’s the truth: there is death and life in almost every room if you’re willing to look for it:
• One person is filled with hope, while another is in despair. Let’s listen.
• Some have really good news to celebrate. Let’s celebrate with them.
• Someone has a dying marriage; another has a dying career. Let’s reach out.
• Many people are lonely, even in the midst of a crowd. Let’s be warm and welcoming.
• One person’s faith may be dying, while another has a brand new faith. Let’s encourage.

In Brandon Heath’s song, “Give Me Your Eyes,” he prays to see others through God’s eyes. It’s probably a good prayer for us all of as we gather with family and friends for the holidays: 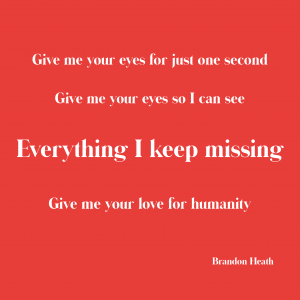 Jesus noticed people–the good and the bad, the blind and the beggar—everyone He met. And He reached out to encourage them. That’s a wonderful trait of His I hope we can all embrace this holiday season.

*This story is an excerpt from my book, Seeking a Familiar Face. Thank you BETH BICE for sharing your hilarious, one-of-a-kind story!

**For a great read on this subject, I recommend this heartwarming novel: The Noticer by Andy Andrews.