Pray With Strangers–Even If You Don’t Really Want To

She barely made our flight. Just before the plane door closed, she charged in, marching down the isle like a bulldozer. She wore a faded Def Leppard t-shirt, a puffy coat with a coffee stain, jeans that must’ve been two sizes too small and a menacing scowl.

Surely, she won’t sit next to us, I thought as I glanced at the empty seat next to my husband, Mike. But of course, she did.

She was as broad as she was tall, so it took her a while to wedge her body into the seat. Soon, another passenger came down the aisle behind her and said, “Lady, you’re in my seat.”

Angrily, she replied, “What in the ‘heck’ (or something like that) difference does it make? I’m not moving. Go find another seat!”

Meekly, the guy took a seat a few rows back.

This was going to be a long flight.

And it was, except we never left the ground. Snow began to fall. Not just light, happy snow, but fat, swarming flakes came down so hard that soon the ground of Salt Lake City Airport was covered, as well as the wings of the plane.

We had expected bad weather. The storm was so formidable it was even named “Snowstorm Helena,” and now, we were stuck in it. We waited, fully loaded on the tarmac for over an hour.

We began talking with our new seatmate. She was a lady trucker. One of her kids was in jail, the other in rehab.

She said, “I married my current husband only because I was broke—not for love—and I told him this upfront.” Then she rolled her eyes and said, “Here’s the most ridiculous thing: my husband wants me to be faithful. That’s impossible when I’m on the road.”

This was so much more than I wanted to know.

Bitterly, she continued, “I’m not going to be faithful to someone I don’t even love. He’s such a loser. I’ve been on a cross-country haul and now I’m stuck in this ‘dang’ snowstorm. I have to get to Kansas City by tomorrow.”

Then strangely, she teared up a little. Her rough, cursing-every-other-word exterior seemed to slip just a bit as she said, “I’m having gastric bypass surgery next week.”

Fear flickered across her face as she grew nostalgic: “I’ve never really had a chance in life. Dad used to beat us kids when he was drunk. Mom died of an overdose. Basically, life sucks. Here’s the tattoo I got last year after I was taken off suicide watch.”

I shuttered as I noticed the ferocious scar on her wrist next to her small peace-symbol tattoo.

After an uncomfortable silence, I redirected the conversation: “I hear gastric bypass is a life-changing surgery. It sounds like you’ve had a lot of pain in the past, maybe God will use this to give you a new life.”

She narrowed her eyes at me defensively for a long minute. “That’s pretty unlikely—since I’m an atheist,” she snarled. “I believe God wants to make me as miserable as possible before I die. So far, he’s done a ‘heck’ of a job.”

Finally, our flight was cancelled, so we deplaned. Later, I saw her walking in the terminal and for some reason I really can’t explain, I asked if I could pray with her about her upcoming surgery.

“It can’t hurt,” she grumbled.

So I prayed with a complete stranger, a lady trucker, an atheist and a suicide survivor in a busy airport terminal in the middle of a snowstorm.

I don’t do that very often.
In fact, I never do anything like that.
It felt awkward.
I didn’t really want to do it.

“Lord, protect her life during surgery next week. Heal her pain. Give her a second chance—a fresh start, a new life that includes you as Lord. Let this be a new beginning. Show her that you love her and want to bless her.” In Jesus’ name, amen.

Tears flowed over her carefully built dam of brawn and bitterness. And my tears flowed, too.

I cried because I realized how easily I avoid the people who need love the most.

It took being stuck in a snowstorm for me to stop and show compassion to a stranger. I wish it hadn’t.

I held her as she sobbed for a long while. Finally, she whispered, “Maybe you’re right; maybe God does love me, after all. Thank you.” And then she walked away.

Sometimes, God calls us to display His love to strangers.

But every time you let the Lord lead you to love someone who is hurting, you will walk away blessed. I sure did.

Be willing to go to where the Lord sends you, today. Don’t hold back. Demonstrate His love to the bitter, needy and hurting.

Remember, there are souls at stake. People locked in misery. Truckers caught in a storm. They need to hear how much God loves them. So many people simply do not know. Tell them:

“For God so loved the world (not as a mass, but as individuals, like you and me) that he sent his one and only son (which is the greatest gift of love ever given), so that whoever (truckers, atheists, travelers, writers) believes in him should not perish but have everlasting life.” John 3:16 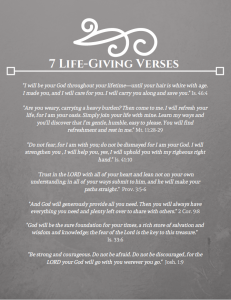 Ever need a special verse to share with someone who is hurting? Email me to request this free list of inspiring, live-giving verses! hello@maypatterson.com