If You Feel Like the Worst Mother Ever, Try This

I stood in the driveway barefooted, with tears running down my cheeks, as I watched Will, my 20-year-old son, leave home.

I had no idea where he would spend the night.

I had no idea what obstacles he would encounter along the way.

I didn’t know why I agreed to let him drive across the United States, ALONE.

Will planned to hike, rock climb and camp his way across the country for over two weeks, until he started his summer job in Northern California.

Just before he left, I slipped him an envelope filled with emergency cash and a homemade turkey sandwich with mustard and pickles. I went over driving precautions again and handed out some motherly advice. At last, he pulled out of the drive and began the 2,000-mile trip.

Even though that sunny May morning was beautiful, my heart felt empty, bleak and cold. I was sick with fear. Questioning my judgment. Beating myself up. Although my husband and I made the decision together to let Will drive to California, guilt crept in anyway, pressing down on my heart like a stone.

I stood there thinking, “I’m the worst mother ever.”

If you’re a Mom, then maybe you can relate. Perhaps you once stood tearfully in the driveway, too, proclaiming yourself to be the “worst mother ever,” like I did.

If so, I’d like to share some truths with you that I’ve learned to cling to. When I feel like I’m at the end of my parenting rope, it strengthens me to say these truths out loud:

1) God made me a Mama for a good purpose.

Once my doctor said, “You’re going to have to stop taking fertility drugs for 6 months to a year.”  I sat there in shock, blinking back tears, wondering if I would ever become a mother. But later on, have mercy, I had 3 children in 2 years! (Will is the twin in the center)

Over the years I’ve learned this: God didn’t make me a Mama by mistake; He made me a Mama for a good purpose. And even though I often fail, His purpose in my parenting will stand.

I believe you’re not a Mama by accident, either. God had a very good reason for leaving His children in your care. When you feel like a failure (and believe me, you will) trust in this truth. Say it out loud. Claim it for yourself. Pray for God to help you live out His good purpose in your parenting, for:

One day, the twins accidentally killed our goldfish and marked up my dining room table with a Sharpie. Dinner burned while I was conducting the goldfish’s “funeral.” I was beyond frustrated! That night, I had an ugly meltdown. I mean, UGLY.

The next day, I felt so ashamed. I apologized to my husband and to the kids; then I repented to God. But I also learned something: a bad day doesn’t make me a bad mom–it just makes me a normal one.

Having a bad day doesn’t make you a bad mom, either. If you’ve failed, (and who hasn’t) it doesn’t mean you’re a “failure.” Be careful not to burden yourself with negative labels. Instead, try to learn from each failure. Pray that God will help you use each failure as a stepping stone toward being a better Mama. The Bible says:

3) Love never gives up—so I won’t give up, either.

Since the moment they placed my newborn daughter in my arms, I’ve never been the same. 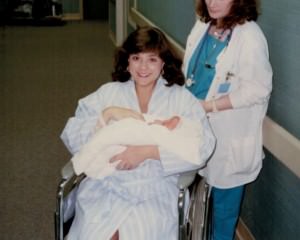 If you’re a mom, I bet that moment probably changed your life, too.

But sometimes you may feel like you just don’t have what it takes. Somedays you’ll be overcome with worry, pain, or failure. Even if your kids rebel, or pull away, or disappoint you, remember love does not give up and neither can you. This verse helps me:

“Love never gives up, never loses faith, is always hopeful, and endures through every circumstance.” (1 Cor. 13:7)

Thankfully, God is a parent, too. He understands how difficult it can be. And He’s merciful when you fail. In fact, I’ve learned that you can’t parent successfully without Him. That’s why it’s essential to seek after God’s wisdom as you parent. Pray. Worship. And then trust Him to help you.

Even though I was unsure about Will’s trip, he had a grand adventure. He camped in national parks, saw the Grand Canyon, hiked and rock climbed in Yosemite, and made some great friends along the way. In those two weeks, he faced ups and downs and had problems to work out, but his trip went well.

We took this picture when Will returned to Huntsville. I was relieved; he was empowered. Was I a “bad” Mama to let him go? Who knows? His trip wasn’t about my parenting, anyway. 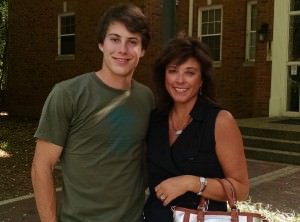 If you feel like the “worst mother ever” right now, or just a less-than-perfect-mom, I hope you will remember the value of speaking truth out loud. Don’t let your frustrations and flaws rob you of the joy of being a Mama. Instead, be thankful for the beautiful privilege God has given to you.